So I completely forgot to do a journal about our Hong Kong trip, it’s been crazy busy at work and up to the last minute I haven’t even thought about the trip much, let alone the thought of a journal cross my mind.  But we left Wednesday night, I sluffed off work early to make a 7:00p.m. flight, and although the airport was eerily empty the plane was late to take off.  We reached Thursday morning (next day), relatively easy flight and after a longer than usual nap we had a good long walk along the promenade where we saw an orchestrated light show along the Victoria Bay waterfront, including lasers beaming out of the skyscrapers along the night skyline at 8:00p.m. We paid a visit to the night market on Temple Street and just before that we walked along Nathan Road to explore the city district of Kowloon. 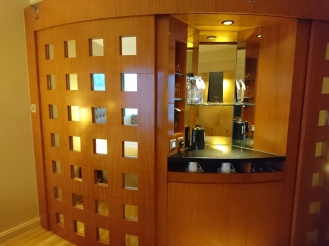 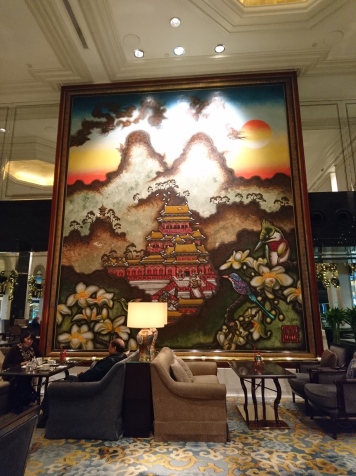 Our hotel with harbour views for days

On the second day we took the Macau tour and left early just before 8:00a.m. after a slightly rushed but filling breakfast.  It was a full day going through the turbo boat, which was quite a choppy ride and I couldn’t see much due to the splashing water. We made it, after a very VERY slow immigration officer that delayed us big time – not sure why he was staring at nothing for half the time. The weather in Macau was amazing, and the character of the city is quite unique and worth seeing, a strong Portuguese presence everywhere from food to street signs.  After St. Paul’s ruins we went to the Museum which my son really loved, and had great picture opportunities from the rooftop of the Museum. 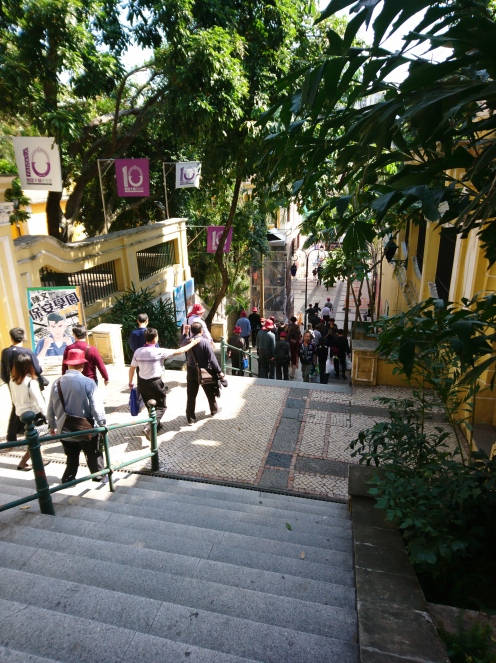 Then off to the Golden Dragon hotel for a slightly disappointing lunch, we had a nice chat with some Indonesian visitors, a father with his two daughters, before we headed off to the Macau tower for more great views (I went up without the fam, they were doing some window shopping in the attached mall).  Then to the Sands Casino, which we obviously couldn’t go inside with a child in tow, but had a nice sit down at the outside McDonald’s.  We went back to Honk Kong after a delay in boat take off and a tough wait at immigration due to my little guy deciding to sleep midway on the boat.  Eventually we reached the hotel and rested right away for another productive itinerary in the following day.

Around Kowloon – and a little bit of the Island

Which brings me to today (the day I’m actually writing things that I did here).  After an early morning having a solo walk through the City, I left the fam to sleep in and chill out a bit after an intense day yesterday in Macau; very impressed with the little guy.  I had a solitary breakfast Honk Long style with dim sum and noodles and went up to Victoria’s peak in Hong Kong Island.  There was no queue, surprisingly empty, which as I found out later in the day was one of the smartest moves I could have made.  The peak was awesome and a much needed soul replenishment; being around nature and fresh air.  It was an easy hike, despite the gangs of kids who came on what seems to be a school field trip day.  So glad I came earlier to avoid the mad crowd.  Then back to the hotel through what I can only describe as an immaculate subway system, but I think the early timing made this an exceptional experience.

After regrouping with my favorite two people in the hotel, who already had their separate breakfasts, we took a similar taxi route. This time though it took a much longer time due to the apparent formula one race happening –  which I was oblivious to.  Made it to Hansy Mall and went straight to the Elisate Bookstore which was similar in style to Kankoniya. Got some nice gifts and tried a Korean pizza restaurant, talk about fusion.  Headed to the Honk Kong Park and had great traditional tea in the tea museum’s tea house.  Reworked our appetites and after a brief disorientation made our way to the Perfect Vegetarian Restaurant which was run by monks, food was awesome. 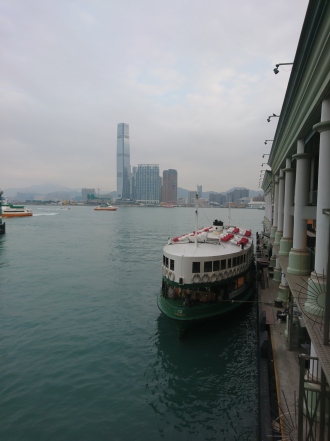 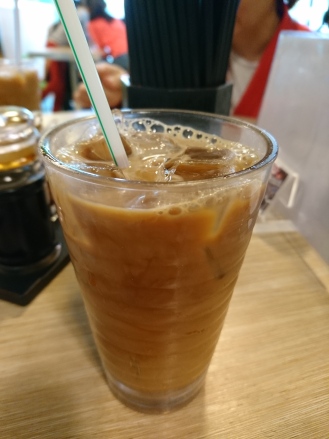 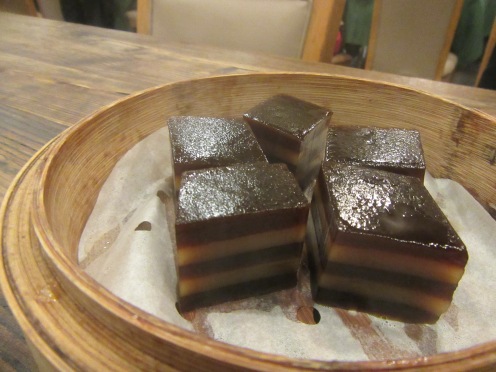 Site and tastes of Hong Kong,from the peak to the Island

We had a good workout walking around the city and decided to call it a day and head back to rest and catch up on things (work of all things).  Hopefully tomorrow goes smooth as we venture into Disneyland (Shangri-La Kowloon, 7:31p.m. in Day 3)**

Another early morning with a nice walk (solo) down to the Star Ferry pier.  Took the ferry to the Island – much easier and crazy cheaper than the taxi and even the subway – pissed I didn’t do it the day before though.  It took only 10 minutes and got amazing views and travelled in style.  Apparently, they were getting ready for the Formula 1 still because a lot of the waterfront was closed off, but managed to get a few great photos and see an ol’ fashion “Junk” in action finally – despite that it is only there for tacky tourist rides.  Saw some early morning Honk Kong life of the people here which was nice (jogging, yoga, reading newspapers etc.) then headed back.  After a quick rest, off to a very big breakfast we all went and then packed up to check out – before time I might add!   Had a nice quick walk to the other side of our hotel which we haven’t explored yet on our way to the Science Museum which was a pleasant surprise – much better than expected and we spent a good 1.5 to 2 hours there, our little guy didn’t want to leave.

Had a quick lunch at a ramen place nearby and then grabbed our bag from the hotel and took a cab to Disneyland.  After the usual nice couple of fights with each other, at different times – we do fight shifts usually, we reached to a very nice hotel (Disney Hollywood).  Loved the retro Art Noveau look mixed in with Disney.  Great look and not too over the top when it came to the room décor.  It was hard but we eventually left the beautiful hotel to go to the park for a good 5 to 6 hours.  We thought the queues would be longer and guessed maybe we’d hit 5 rides max.  We were pleasantly surprised and ended up doing at least 10 between the three of us, most of the good ones with a couple of shows for good measure. 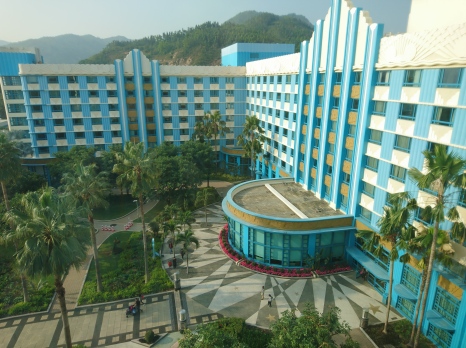 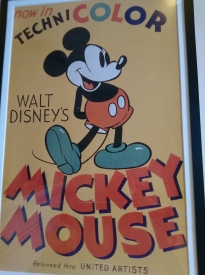 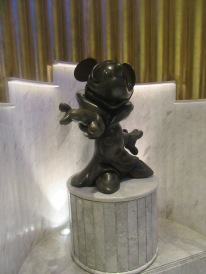 The highlights were the Iron Man ride, the roller coaster with the mining theme, the toy story car ride, and the amazing fireworks ending just as they were closing the park at 9:00 at night.  The last-minute dinner we had was disappointing to say the least, the duck I had was subpar and Hanan didn’t have much on hers that she felt like eating.  Made a smooth ride back with the hotel shuttle bus and I did a last-minute shopping spree at the hotel Disney store (which was probably a rip off) but got me a Mickey Mouse watch, which I think looks more lux than the price, got my kid a much needed big-boy water bottle, and for the misses an exclusive Disney Hong Kong bead for her Pandora bracelet.  I was still struggling to find Disney socks, but will re-attempt tomorrow at the park which should have a larger collection.

Not at all looking forward to going back to work, especially as I am answering emails in parallel to this journal – but will take a deep breath going back in.  Not before I enjoy the last minutes of Hong Kong and Disneyland tomorrow – a much needed break from adulthood, a great city, and lots of great happy memories (Disney Hollywood Hotel, 11:15p.m. in Day 4)***

Known for it’s amazing restaurants – what would you say is Hong Kong’s must try restaurant?